« YESTERDAY… Between the Mediterranean and the North Sea »

500 centuries of local history in the heart of Europe: this is the theme of the permanent exhibition at the Laténium. You are taken – step by step – through the different stages of human evolution, from the present day back to the times of the Neanderthal man. The exhibition consists of 8 different rooms, comprising a total area of 2200 m2. In reverse order, it spans a time frame from the Renaissance to the Palaeolithic Era. Thanks to clear explanations, small-scale models, audiovisual media, games for children and many more features, each room settles you into a new atmosphere, where you may learn about the basics of archaeological work and the scientific interpretation of our own past.

If you would like to be guided through the permanent exhibition, you might like to consider renting an audio guide: you will learn more about 50,000 years in less than an hour!

Mankind, time, and environment. These three axes, closely linked, are the main pillars of the permanent exhibition at the Laténium. Archaeologists at work, exceptional fieldwork discoveries and figurations of our ancestors: these are just some of the many ways to discover archaeology. 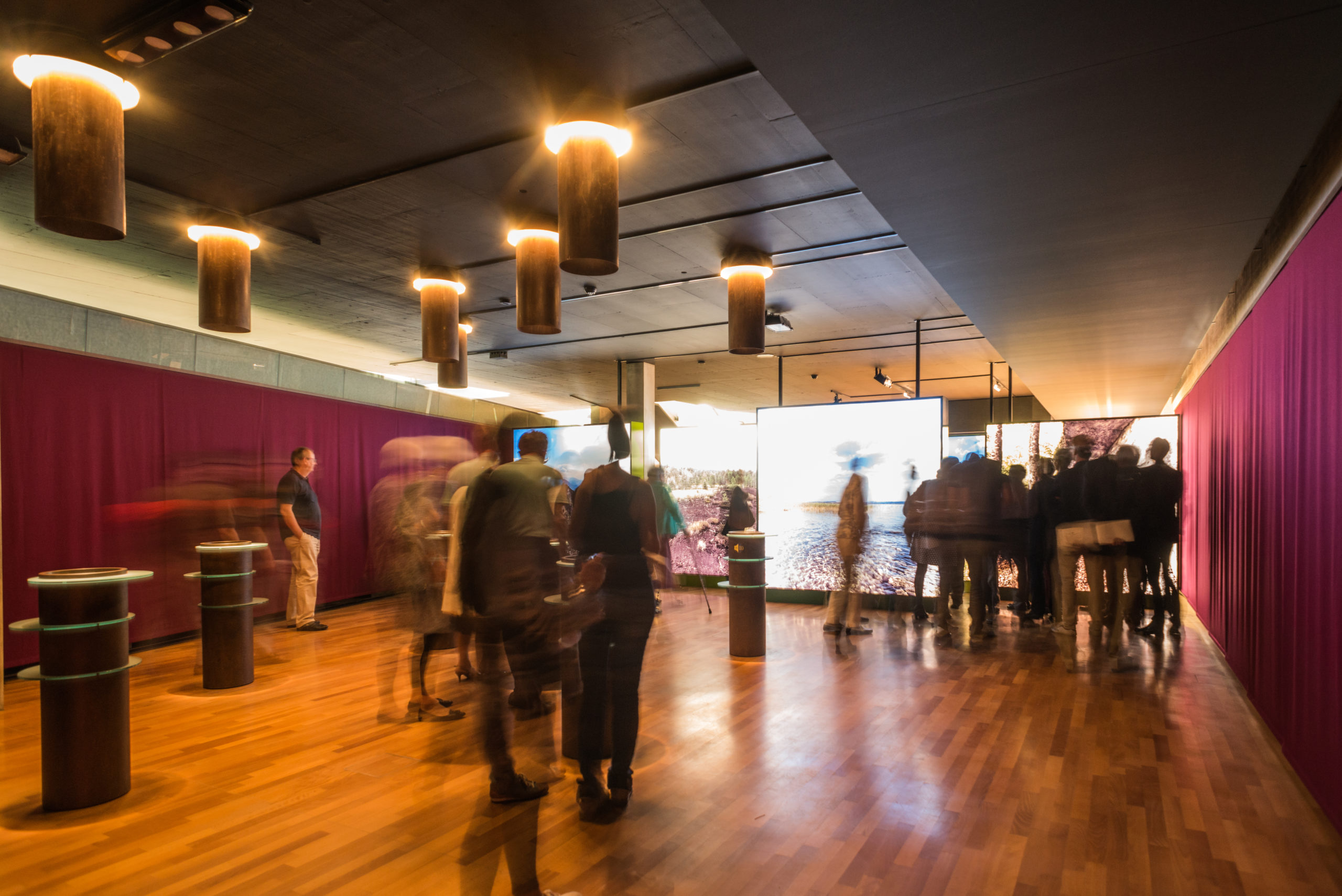 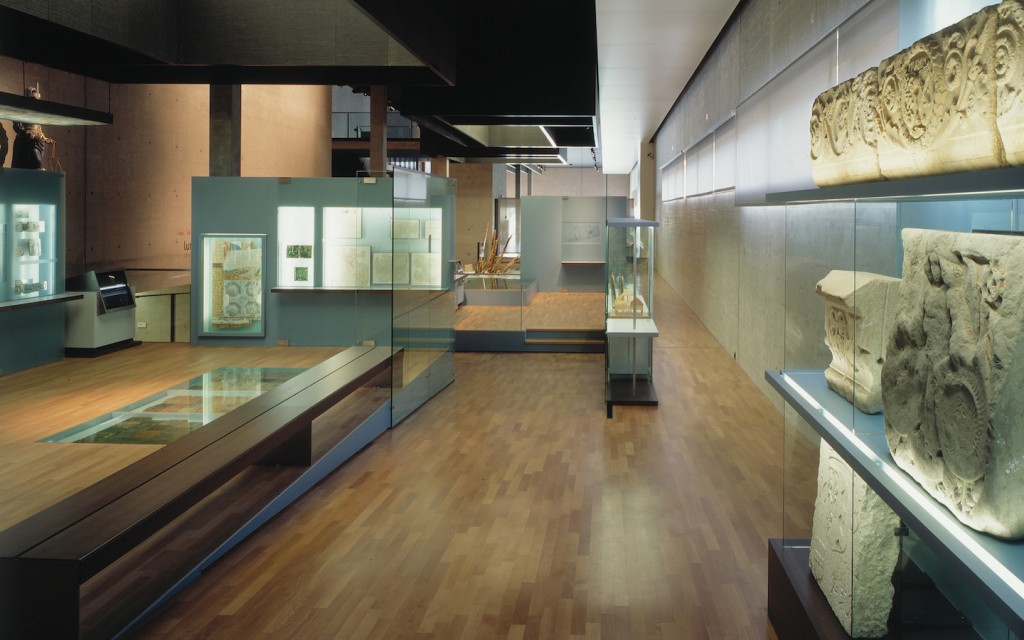 The first symbolic step down the ladder of time brings you back to the Middle Ages. In this room, you will discover objects originating from various contexts such as religious and profane architecture, domestic life, agriculture, fishing, tombs and commerce, such as the impressive ship wreck of Hauterive and its cargo of earthenware dishes and iron bars.

The Gallo-Romans organised and structured the landscape into small parcels. The area around Neuchâtel was no exception; it was divided into squares and listed in a land register. During the Gallo-Roman era, the Neuchâtel area counted several quite remarkable constructions, the mausoleum of Wavre for example, or the palace of Colombier. Their models in the Laténium show both their exact dimensions and their high architectural quality. Mosaics, wall paintings, marble busts, and statues of gods: a new lifestyle made its appearance, fostered by major improvements in construction methods and heating systems. 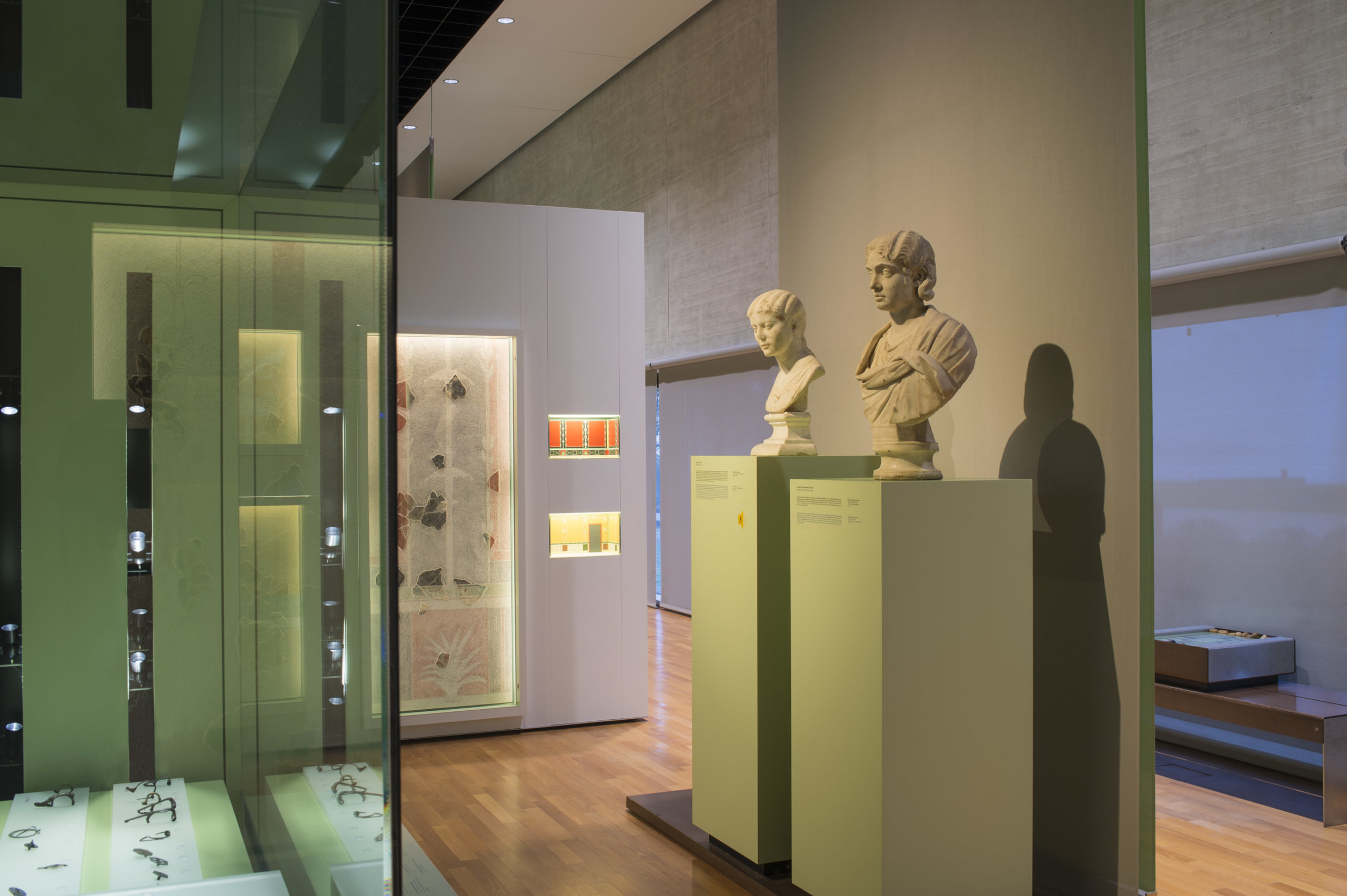 This impressive room opens towards the vast fishing pond of the park. It hosts the biggest artefact of the Laténium: the Gallo-Roman barge of Bevaix, which is more than 20 m long. Just next to it, you will discover, in a huge showcase, the secrets of underwater excavations, a field in which Neuchâtel archaeology has gained a strong international reputation.

THE CELTS OF LA TÈNE

The Celts were not simply adventurous warriors. The virtuosity of their craftsmanship gives us precious insight into the cultural refinement of their society. Celtic art seems to draw a metaphorical image of the society which produced it, violent yet intrepid and inventive. This duality is presented to you in The Celts of La Tène room in a series of spatial contrasts and material oppositions, for example between floor and roof. This symbolizes the dual link established by the Celts between the terrestrial and celestial world. 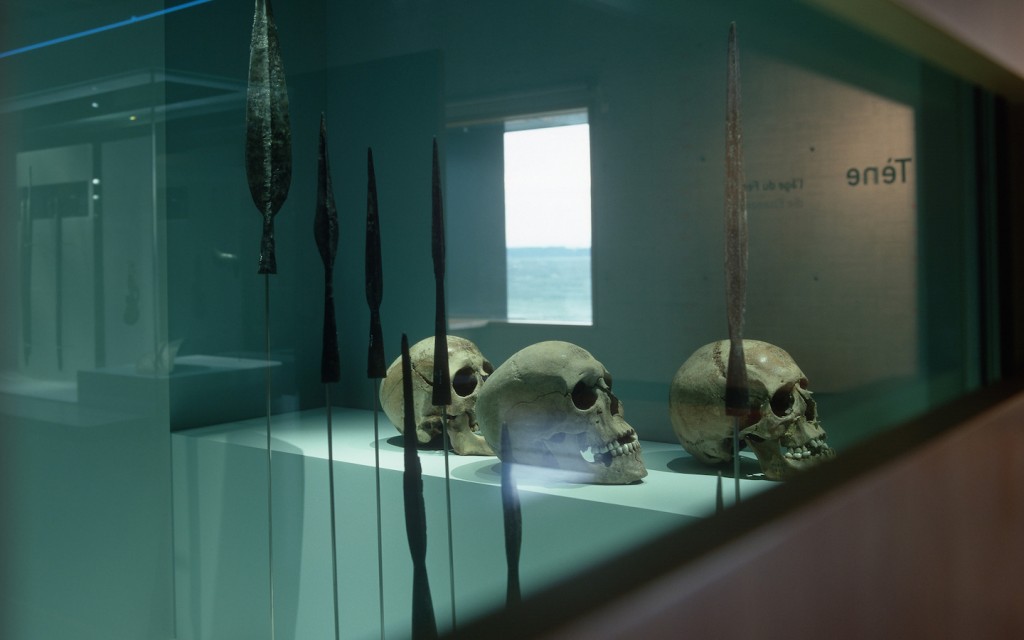 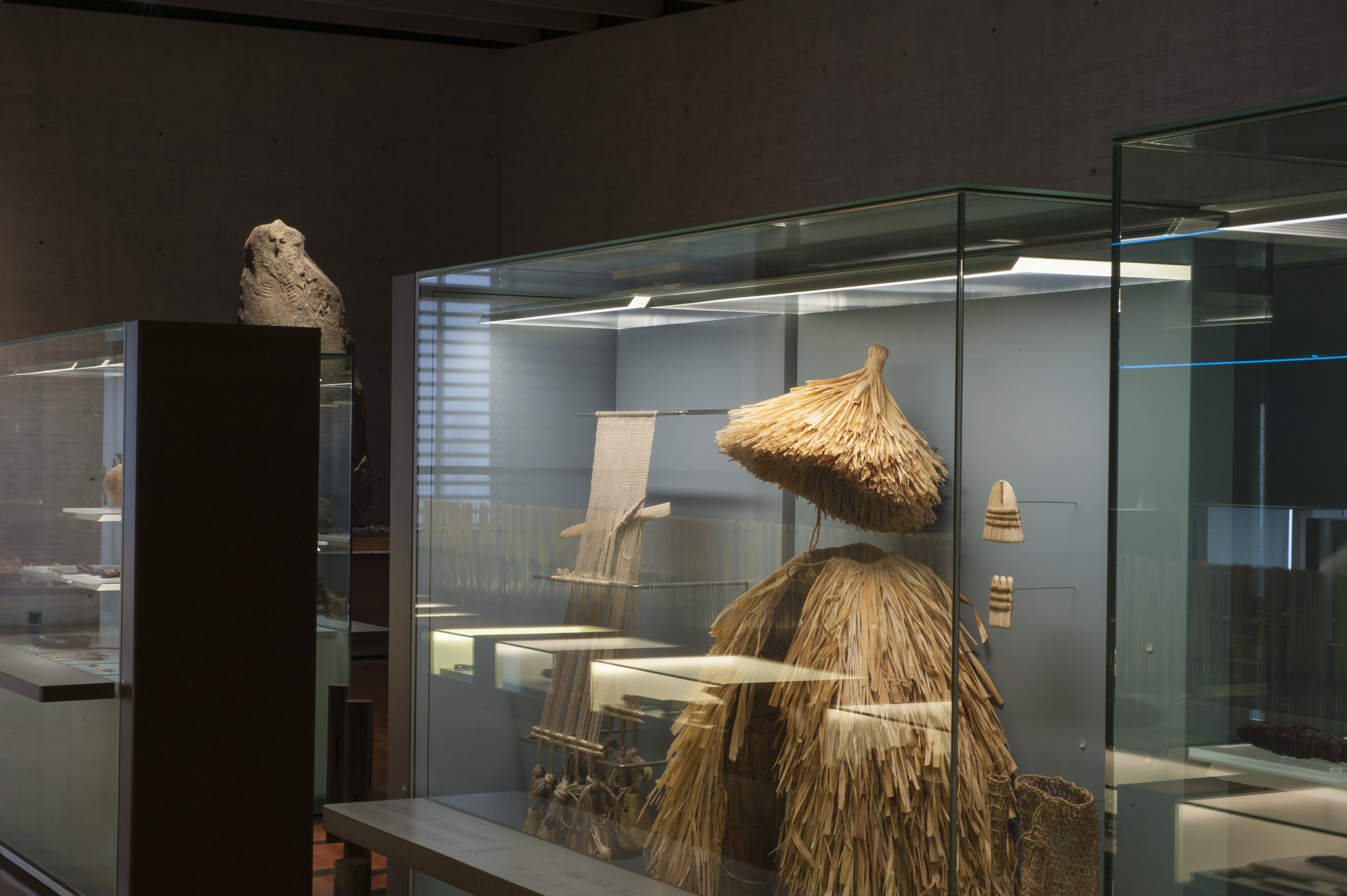 LAKE DWELLINGS FROM THE BRONZE TO THE NEOLITHIC AGE

As human societies started to constitute their first permanent settlements, they strove to strengthen their roots. Huge megaliths were erected to mark the symbolic appropriation of a given territory. In this room, animated by the sounds of lake-dweller craftsmen at work and bordered by stylized wheat fields, the showcases are aligned to a regular grid just like lake-dwellings. Various remains of organic material, pottery and stone tools bear moving witness to past life on the shores of Lake Neuchâtel, during the Neolithic and Bronze Ages.

TRACING THE HUNTERS: FROM THE MESOLITHIC TO THE MAGDALENIAN

Animal subsistence, Animal art, sculpted or painted on rock walls – in the windswept tundra, all life in this era was organised around the animal. Back-lighted showcases emerging from the floor host the few traces and findings we hold from this period: tiny jet statues, ochre palettes, projectile fragments and tools made out of silex or deer antlers. 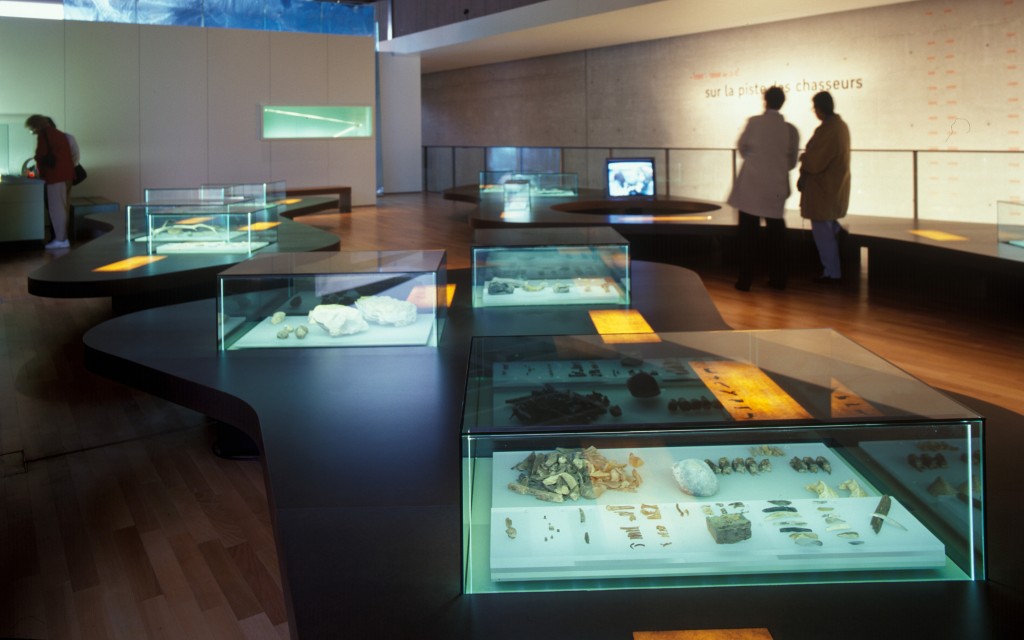 SWITZERLAND UNDER THE ICE

Glacial ambience, dripping sounds fading away into infinity, impressive deep blue walls: here you will pass through 25,000 years of ice age in just a few steps.

IN THE LAND OF THE GREAT BEAR: THE MOUSTERIAN PERIOD

The Mousterian is the last period of our virtual time travel. The architecture of this room imitates the entrance into the cave of Cotencher, which gave humans shelter during the entire Mousterian period. In fact, inside this cave, the oldest human remains in the whole of Switzerland were found: the mandible of a Neanderthal woman who died nearly 50,000 years ago. In the same cave, a realistic life size model of a threatening cave bear stares at you from the corner of his eye. On the floor, a multitude of small illuminated pictures pave the way with coloured lights in the darkness of the cave – they are part of your path, just as the depicted animals were part of the life of the first human beings settling in Switzerland. 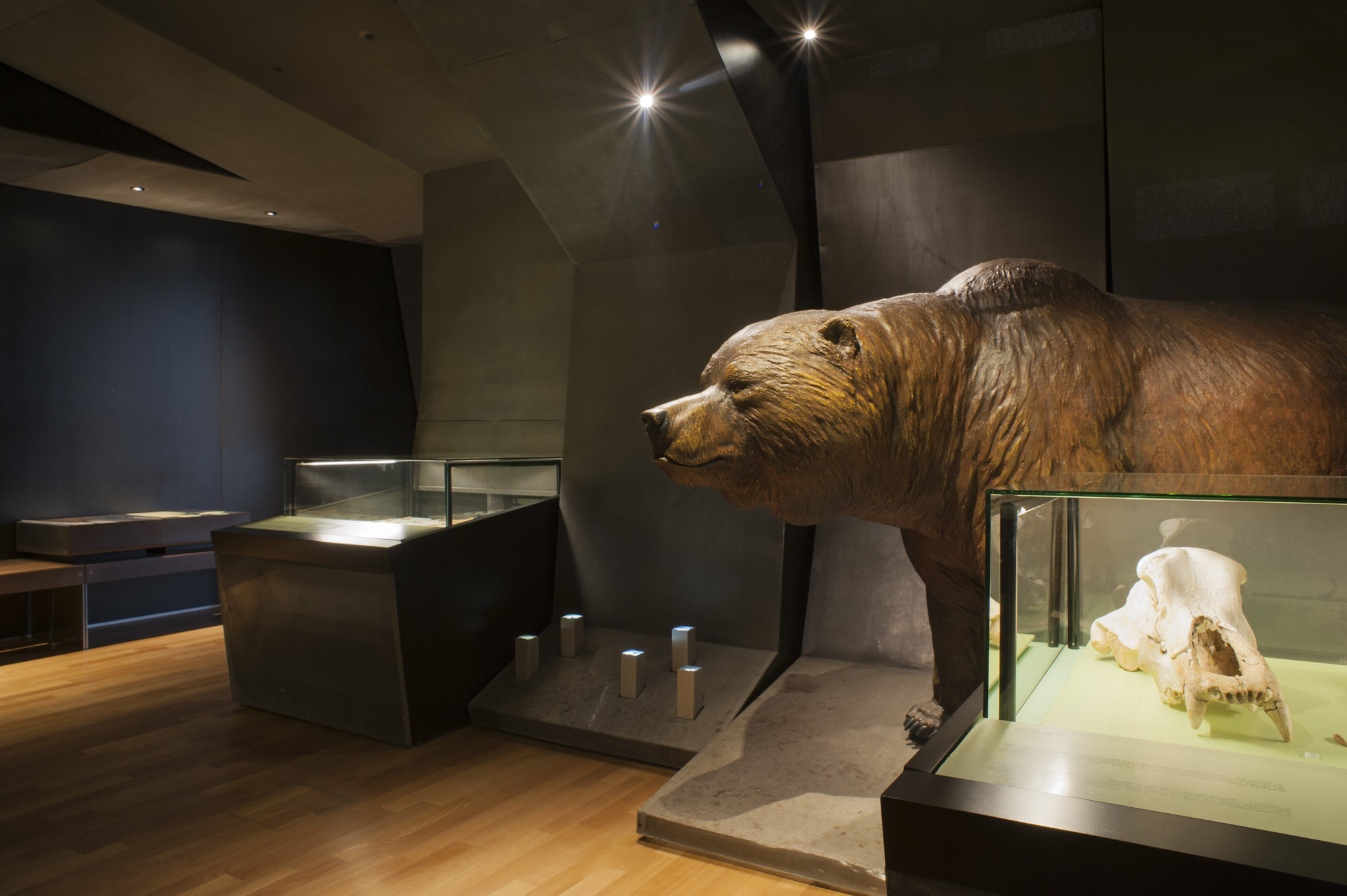 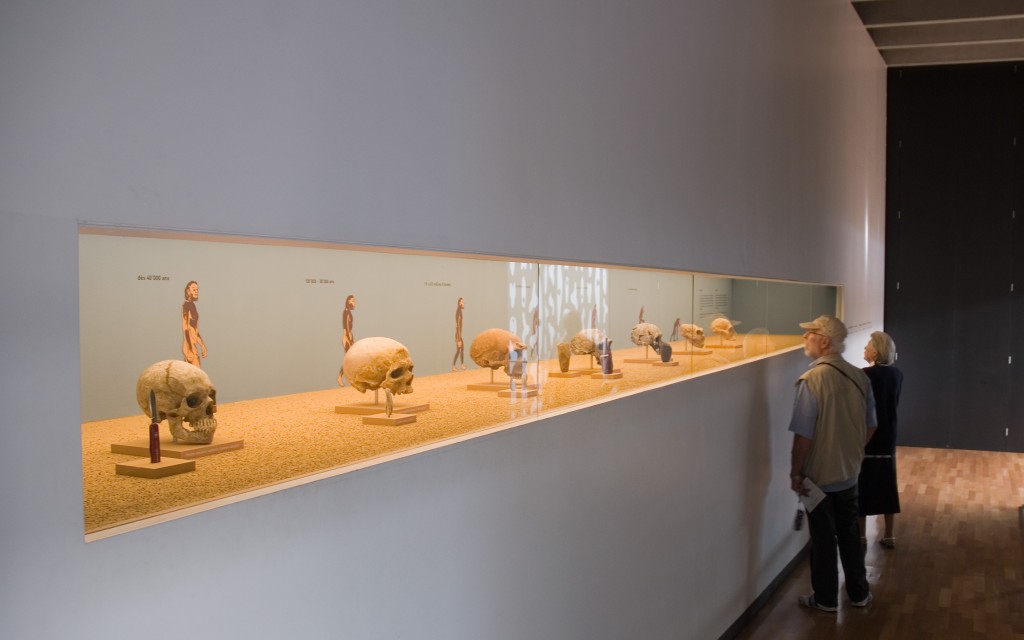 The tour ends with the presentation of human evolution. In a long showcase, which you follows on your way out of the museum, the skulls of the different types of known hominids are aligned, once again from the youngest to the oldest. Each hominid is shown with a characteristic tool of its period: a Swiss army knife for the present-day human, a flat chisel for the Cro-Magnon man, a scraper for the Neanderthal man, a hand axe for Homo Erectus, a chopper for Homo Habilis, and no specific tool for the Australopithecus, even though he probably used rudimentary tools…